Roughly two months ago, I embarked on a short mission: to setup an instance of hubot for integration with Slack. Despite being armed with only a very limited working knowledge of Javascript (hubot runs on node.js and scripts are written in CoffeeScript), the tutorials seemed pretty thorough and made the setup process look do-able, so I decided to have a crack at it. 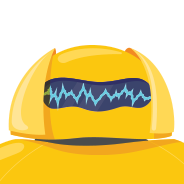 I’ll begin with my inspiration for doing this, and then provide an overview of the setup process (which I suggest you skip over if you’re not interested in the details), followed by some examples of the few things I implemented with my instance of hubot at the outset. In case you haven’t yet deduced it from the title of this post, his name is Hugo.

As I mentioned in my previous post, Lorenz and I have been collaborating on some #rstats projects over the past few months and very early on we started making use of Slack, also using it’s Github & Trello integrations which both involve bots.

Sidenote: If you are involved in any form of regular collaboration and haven’t already had a look at Slack I highly recommend you do. We’ve found it to be hugely valuable for facilitating communication, and also a lot of fun to use, especially due to the broad possible range of integrations with other tools.

Bots are a hot topic at the moment, and the Slack team seem to be heavily invested in their support for a wide range of different bot integrations. Based on their list - which is ranked according to popularity by default - Hubot is the most popular. It was originally developed at Github to automate their company chat room and was later rewritten and made open source.

My decision to explore Hubot further was motivated by a combination of curiosity, a desire to learn, and the hope of adding further to the enjoyment I was already getting from using Slack. Hubot was immediately appealing to me since it is completely scriptable, and it’s popularity and solid documentation provided further affirmation that it was worth giving a try.

As I alluded to above, the team at Github have provided a detailed set of instructions on the docs page for hubot, so that’s where you want to begin if you’re looking to give this a try yourself. Here are the essential steps:

Install node.js and npm (if you don’t already have these)

Create a new instance of hubot

From a new directory e.g. myhubot, run:
yo hubot --adapter=slack

This script will prompt you to describe the bot you are going to build, and create a file that NPM can use to help manage your project.

Setup a Custom Bot on your Slack team

Navigate to the Custom Bot creation page and click on Add Configuration. Then follow the prompts in order to register your bot and create a token. This token can then be used to allow your instance of hubot to log into your Slack team as a bot.

You can then run your instance of hubot locally using the run script below (note that you’ll need to copy-and-paste your token in from the previous step):

By default, hubot should then join your #general channel within Slack, where you can test it out e.g. with:

Once you’ve verified that hubot is working locally, it is a good idea to deploy your bot somewhere e.g. Heroku (otherwise you’ll need to have hubot running permanently on your local machine which probably isn’t practical).

If you go with Heroku and are making use of their free usage tier, note that free dynos sleep after 30 minutes of inactivity. Since interaction is done through chat, hubot has to be online and in the room to respond to messages. To get around this, you can use the hubot-heroku-keepalive script, which can be configured to keep your free dyno alive (given the limitations on the free plan, more than 18 hours/day will require an upgrade).

Add your own custom scripts

So hopefully by this stage you have got your instance of hubot configured and deployed, so all that’s left to do is to make the bot your own! For a start, have a look through the scripting overview provided here, and then get going adding your own custom scripts to your bot to give it new functionality, personality etc.

So below are some examples of Hugo in action based on a few simple scripts I added after going through the above setup process. 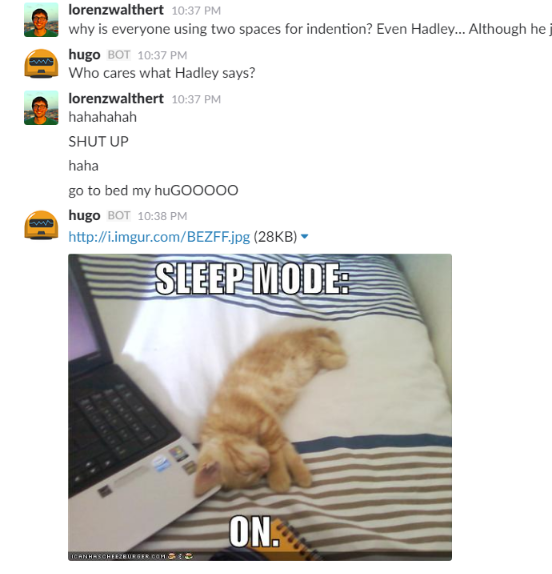 He celebrates when we get successful build notifications from Travis 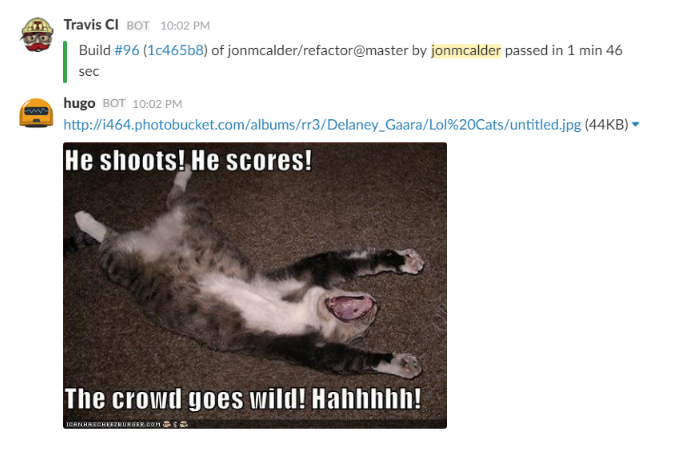 Strangely enough I couldn’t spot any failure notifications within our Slack channel but when there is one, Hugo will chime in with an appropriately themed image - which again usually has a high chance of being a lolcat like one of those shown below. 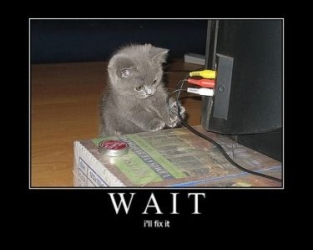 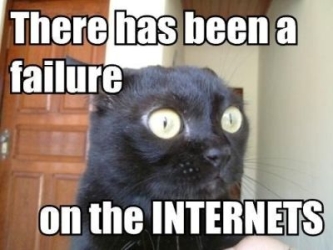 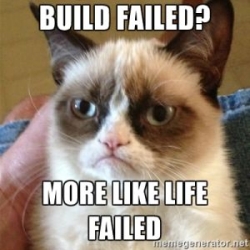 All of the above examples were straightforward to script as they just rely on rudimentary regular expressions, but I was somewhat surprised at the entertainment value we got out of these simple eavesdrop and respond behaviours from a chat bot. Hopefully I’ll be able to revisit this over time and explore some more advanced interactions. There are also loads of hubot scripts all over Github which I am yet to explore (e.g. here).

If you have any ideas or suggestions for Hugo please feel free to comment below or take a look at the repo and submit a pull request - given the limited amount of time I’ve invested so far and the fact that I’m just winging it I’d love to learn from someone who actually knows what they’re doing!